THE FRUIT OF THE SPIRIT - FAITH -

Dr. Charles E. Fuller had one of the most fruitful radio ministries in history. It was called, The Old Fashioned Revival Hour, and it covered 90% of the inhabited world. Without faithfulness it never would have gotten to this level. He and his wife lost their first child. Then her health failed and they were separated. Then a serious financial crunch involved them in a hard five year battle to recover. 12 years after their first child died they had another child that almost died. Added to all this trial, they were deserted by some of their closest friends in the church. How do you get through all that, and touch the world for God? The only way is by the fruit of faithfulness. He could have let any one of his trials stop him, but he didn’t. He was faithful when there was only pain, and God rewarded him beyond what he could have ever dreamed.

Jesus will be ever faithful to us, but the question always is, will we be faithful to Him. Peter
Ainslie writes, “I shall never forget the time I saw Poynter’s great picture “Faithful unto Death.” in the Walker Art Gallery in Liverpool. There stood the Roman guard on duty while the palace was falling into ruins during the destruction of Herculaneum. The dead were lying in the background; others were falling to the pavement amid the red-hot eruptions of Vesuvius; everyone who could was fleeing for his life. The Roman guard might have made his escape, but there he stood like a marble statue, preferring to remain at his post faithful unto death. The picture clung to me like an individual–not simply the man standing at his post of duty but the expression of faithfulness that showed in his countenance. I have thought of it a hundred times since, and have felt its influence as I have felt that of a living person.” Even natural faithfulness can reach great heights, and be a powerful example, but to be faithful to our Lord in day to day living we need more than natural faithfulness. That too is a valuable asset, but to be all that God wants us to be we need the fruit of the Spirit faithfulness.

Initially when I read Galatians 5:22-23, and came to the fruit of faith, I thought it was the faith referred to in Hebrews 11, but as I dug into relevant commentaries and books, I realized that the word ‘faith’ in this instance referred to faithfulness. Hence, don’t be surprised that today’s write-up speaks on the fruit of faith as being faithful to God rather than faith “being the substance of things hope for, the evidence of things not yet seen.”

If you’d remember, in the first write-up in this series, faithfulness was described as love’s Constancy. Waoh! What a description. I’m sure you know how difficult it is to be consistently holy without the help of the Holy Spirit. However, when Christ dwells in Your heart by faith, He lives His life in you, and as you obey His voice, you become more faithful to His every leading. Why not pray this moment and say LORD, I receive the grace to be faithful in all life’s endeavour, I repent of all my past unfaithfulness, and from today I choose to live a faithful life. Thank You for answering my prayers. In Jesus Name. 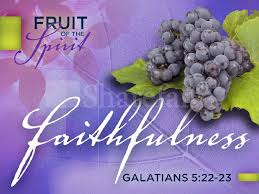 THE FRUIT OF THE SPIRIT – JOY

THE FRUIT OF THE SPIRIT – MEEKNESS

THE FRUIT OF THE SPIRIT – LOVE